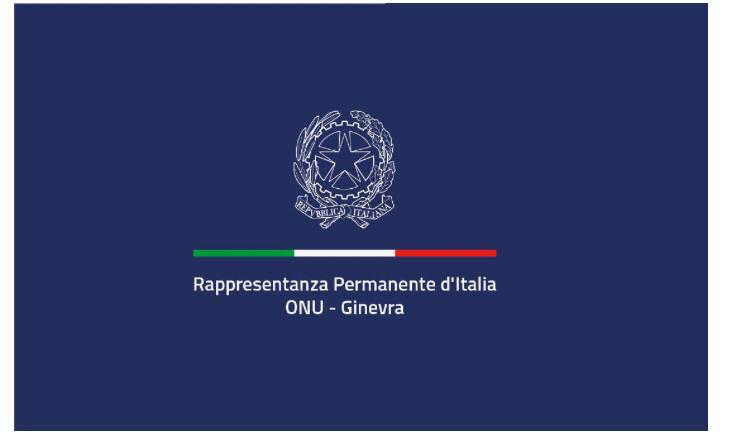 The Permanent Mission of Italy to the
international organizations in Geneva

ConductorMichelangelo Mazza, SopranoAnnamaria Dell’Oste, TenorMarco Frusoni
The singers are members of Cantori Professionisti d’Italia that promotes the candidacy of Italian Opera
for inscription on the UNESCO list of Intangible Cultural Heritage.
Two arias from “La Capinera”, contemporary opera, will also be performed in world premiere in
the presence of Italian music legend Giulio Rapetti Mogol and Gianni Bella.
CompositionGianni Bella, LyricsMogol, LibrettoGiovanni Fulcheri, ArrangementsGeoff Westley
All attendees are kindly requested to register before 6 October 2014 only by email at
ginevra.culturale@esteri.it
Kindly be informed that the entrance to the Palais des Nations will start at 5:30 pm and
will not be possible after 6:45 pm.
Please print this invitation and bring with you a photo ID.
No parking available for non-accredited vehicles inside UN premises and limited parking
facilities outside.
Palais des Nations – 8 -14, Avenue de la Paix – Geneva Entry : Pregny Gate
The International Project 2014 – 2015 “With Verdi in the World – Con Verdi nel mondo”, promoted by Sinapsi
Group, an Italian commercial consulting company, is a project which has led to the creation of a new musical reality
called Orchestra dell’Opera Italiana, that will be protagonist in major performances hosted in worldwide concerts
hall.
The concert represent a unique occasion to establish and develop stable relationship by the musicians of the former
Orchestra del Teatro Regio di Parma – universally accepted as the benchmark of excellence in Giuseppe Verdi
performance – with the local entities like colleges of music, music academies, conservatories and music school, in
order to develop free reciprocal cultural exchange Through the universal language of music, the popularity of
Giuseppe Verdi, the excellence of the artistic proposal ant the appeal joined by the “Made in Italy” in the world.
These collaborations will lead to an International Festival to be held in Parma starting from 2015 during Milan